12FIFTEENstudios is made up of aspiring game developers who are deeply passionate about games and eager to develop interactive experiences for others to enjoy.

Anthony Hernandez started developing video games when he was 14 years old. Since then Anthony has studied game development at the University of California Santa Barbara, Santa Barbara City College, DigiPen Institute of Technology, and the University of Southern California. As an Executive Producer, Anthony oversees the production process of all games developed by 12FIFTEENstudios. Anthony also contributes to game design and programming as often as he can. Anthony is most inspired by the games Journey, Life is Strange, The Last of Us, and any game developed by Blizzard Entertainment. 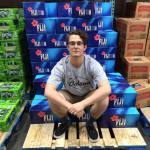 David's interest in game development stems from his interest in other individualized/freelance forms of art. When David was 10 years old he started his first YouTube channel where he uploaded stop-motion animations he created using Legos. After reaching 2,000 subscribers David moved on to other independent art forms like painting and making music. Later on, David developed an interest in video games - fascinated by their artistic potential as master platforms of expression. While in high school David took a summer course at the University of Southern California where he learned to develop his own video games. It was at USC that David met Anthony who brought him in on the idea of forming an independent game studio. David is most inspired by the games Cave Story, Limbo, and Hotline Miami.


"One day the world will see a new Shakespeare will come to be and he won't be writing plays he'll be making games."